How much were the coins worth?

The denominations of the city bronze coinages are difficult to determine. Very occasionally the coins have the name of denominations, and modern scholars have tried to establish patterns for the weights and diameters of the coins from many cities, both on an individual and a regional basis.

Coinages in the Roman world were in gold, silver, and bronze. All issues of gold within the Empire were made of pure gold and were probably legal tender throughout the empire. A few debased gold coins were made in the client kingdom of Bosporus, which had a separate monetary system.

The bulk of their coinage was bronze, which provided the small change available in the East. The term ‘bronze’ is used here to embrace leaded bronze, copper, and brass (orichalcum, an alloy of copper and zinc). For the most part analyses are not available to allow the alloy of base metal coinages to be specified, but analyses for an earlier period do not suggest that the precise metal is of any great denominational significance. 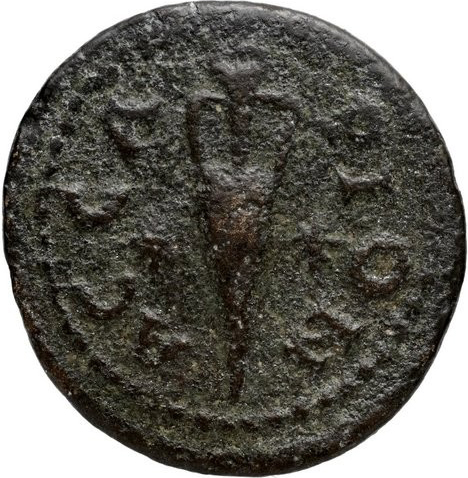 Most provincial coins lack marks of value. People in the ancient world — as well as modern scholars trying to reconstruct provincial denominational systems — have had to rely on the metal, size, and weight of a coin and the image it bears in order to determine its face value. Presumably this was well-known when the coin was issued, but we have avoided assigning conjectural values to the coins in the website.

Among the cities which did place value marks on their coins, the case of Chios is of particular interest. Probably during the reign of Augustus, the city appears to have shifted from a traditional Greek denominational system based on obols to a ‘Romanized’ one based on the assarion, the Greek translation of the Latin as. Similar changes are likely to have occurred elsewhere, as demonstrated by Aegium – a city that put marks of value on its Antonine coins. However, the use of OBO (presumably meaning obol) on the coins of Seleucia Pieria in Syria during the reign of Severus Alexander (AD 222–35) implies that traditional Greek denominational systems could survive well into the third century. In many cases we cannot even be sure whether the face value of a coin was expressed in Greek or Roman terms. 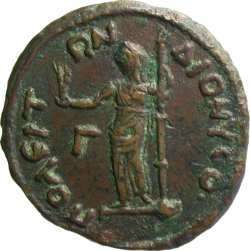 Marks of value are rare on the provincial coinage. In the Antonine period some coin issuing authorities of the Black Sea region placed the Greek numerals Α, Β, Γ, and Δ onto their coins, possibly standing for “one”, “two”, “three” and “four assaria” respectively. In the early third century, for the emperor Gordian III, there is a 4½ mark in the province of Moesia Inferior. There is a mark E (for 5) on coins of Side (Philip), and for 6 on coins of Perge (Philip). In the last phase of the provincial coinages more denominational marks appears, like ΙΑ or ΙΒ (for 11 and 12), and there is even a mark for a denarius at Sinope