What is Roman provincial coinage?

The coinage of the Roman Empire for the three and a half centuries following the death of Julius Caesar in 44 BC has been conventionally called either ‘Roman imperial coinage’ or ‘Roman provincial coinage’. The ‘imperial coinage’ was produced mostly at Rome, and consisted of gold, silver and bronze coinage. The gold aurei and silver denarii from Rome circulated throughout most of the empire, and the bronze is found all over the western half of the empire, but not much in the eastern part. If you are interested in ‘imperial coinage’, then go to the Online Coinage of the Roman Empire website or the series of books called Roman Imperial Coinage.

The ‘provincial coinage’ consisted of gold (unusually), silver and, mostly, bronze coinage. The silver coins were produced in a number of provinces – Crete, Asia, Lycia, Cappadocia, Syria and Egypt. For the most part they were made in local denominations, and their circulation was mostly restricted to their province of issue.

The provincial bronze coinage was produced by hundreds of cities, initially throughout the Empire but after c. AD 40 only in the East. The coins generally have a portrait of the emperor or a member of his family on the obverse, and a reverse which refers to the city in question, often one of its religious aspects.

Apart from Egypt, all these coinages came to an end in or before the 260s and 270s. The Egyptian coinage ceased under the emperor Diocletian (284-305), and thereafter the currency of the Roman empire was more uniform, produced at a network of imperial mints.

‘Provincial coinage’ is defined pragmatically as including all those coins which are not ‘imperial’ (i.e. those not listed in the publication Roman Imperial Coinage or found on the Online Coinage of the Roman Empire website). In the past the term “Greek Imperial Coins” was also applied to this material. These are conventional not juridical terms, although some support for a conceptual division between ‘our’ (imperial) and ‘their’ (provincial) coins can be found in ancient texts.

The coinage may be divided into five groups, conventionally known as: 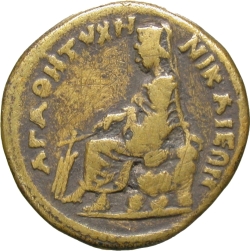 Except for a small number of silver issues, cities produced bronze coins, which circulated locally and provided the majority of small change in the Eastern half of the Roman Empire. During the Julio-Claudian period civic bronze coins were also made in the West, in Spain, Gaul, Italy, Sardinia, Sicily, Africa Proconsularis, and Mauretania, but after c. AD 40 civic coinage was made only in the eastern part of the empire.

Coins struck in the name of cities represent the most common type of provincial coinage. 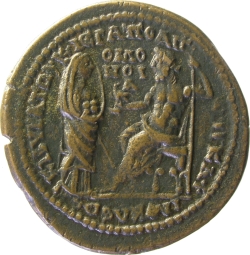 Cities sometimes struck issues to celebrate ‘alliances’ with another city (or sometimes more than one). The Greek word for such alliances is homonoia (OMONOIA). The phenomenon of ‘alliance’ coinage was confined geographically, and was produced mostly for cities in Thrace and Asia Minor. There were relatively few such issues during the Julio-Claudian and Flavian periods, the bulk of the material dating from the second and especially the third centuries AD. In total almost a hundred cities issued ‘alliance’ coins, and several thousand specimens are known today. The background for this widespread phenomenon was the intense rivalry between the cities of the East. ‘Alliances’ could be a means of settling disputes, but were also used to build coalitions in order to enhance a city’s status by aligning itself either with many cities or with particularly important ones. Thus ‘alliances’ formed part of civic ‘foreign policy’ and might have involved the exchange of delegates and joint celebrations and sacrifices. 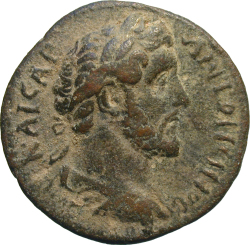 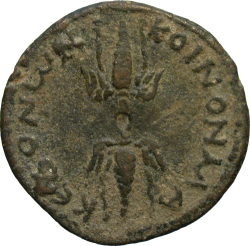 A few coinages were issued in the name of a number of the koina (provincial or regional federations of cities) in the East. In the Roman period worship of the emperor lay at the heart of the function of koina, and their coins often depict a temple of the imperial cult. In other respects coins of provincial leagues resemble civic coins. 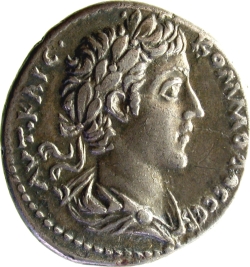 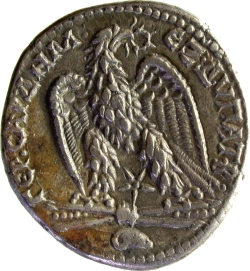 These coinages were struck for use in a single province, probably under Roman provincial or imperial control. The most important mints for this type of coinage were at Caesarea in Cappadocia, Antioch-on-the-Orontes in Syria, and Alexandria in Egypt. In some cases such ‘provincial’ coinages were actually struck at Rome, and sent to the province concerned. Provincial issues comprised silver coins, mostly drachms, didrachms, or tetradrachms, and accompanying bronze issues. A common feature of provincial issues is that they lack an ‘ethnic’ (an explicit reference to the people or place which produced them). 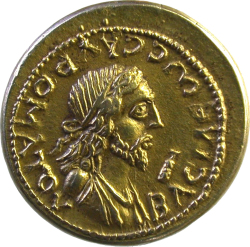 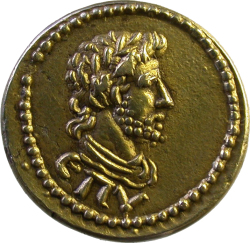 ‘Client kings’ is the term used today to denote the rulers of territories that were adjacent to the Roman empire and effectively subject to it, even though technically autonomous. They often produced coinage, for example in Mauretania or Palestine (Judaea) in the first century AD or in the kingdom of Bosporus (the modern Crimea) throughout the period.

Examples are the coinage struck by the Kings of Bosporus which was centred on the straits between the Black Sea and the Sea of Azov. The Bosporan kingdom struck (increasingly debased) gold and bronze coins, Edessa silver and bronze.

Civic coinage was probably regulated by the administration of the cities in the Roman East, although there is almost no direct evidence beyond the coins themselves. These cities were run by magistrates from local aristocracies which operated in a general framework set by Rome and overseen by provincial governors and ultimately the emperor. Occasionally the emperor might intervene, as when Vespasian revoked the freedom of the Greeks which had been proclaimed by Nero. Coinage was not produced again until ‘permission’ was granted again by Domitian.

There are a number of earlier examples of coins recording the permission of the emperor or a provincial governor, but their significance is disputed.

The absence of central ‘micromanagement’ must have left a considerable degree of freedom for cities and their elite ‘magistrates’ to choose when to strike coins and what to put on them.

In the majority of cases coins appear to have been struck at mints located in the cities named on the coinage, although some regional styles are apparent in the first century, raising the possibility of some sort of centralised or joint production.

From the reign of Trajan die links start to be found between the coins of different cities, and such die-sharing becomes a common pattern from the later second century AD. This has been interpreted as some degree of centralization or co-operation, and is today commonly known as the ‘workshop system’. This system was first described in detail by Kraft in relation to Asia Minor. He discovered many instances from the second and especially the third century AD where coins in the name of different cities were struck from the same obverse dies. He identified a number of ‘workshops’ which supplied groups of neighbouring cities for certain periods of time.

The nature of these ‘workshops’ is not yet fully understood, especially whether they supplied dies or coins, how many individuals constituted a ‘workshop’ (just an individual die-cutter or an entire ‘mint’?), and to what degree the ‘workshops’ were stationary or itinerant. Research since Kraft’s pioneering study has produced more and more evidence of die-links and stylistic similarities between the coinages of neighbouring cities in other parts of the Roman Empire, showing that the phenomenon was not confined to Asia Minor.

Other scholars have questioned the model, and seen a pattern whereby dies might be supplied by central workshops or itinerant craftsmen, but that the coins themselves were largely made by and in the relevant city. As a result, the impact of the ‘workshops’ on civic coin design is not clear, and the enormous variety in coin images and the existence of designs exclusive to particular cities show that the existence of workshops did not undermine the local relevance of coin designs, but it cannot be ruled out that the ‘workshops’ might have been responsible for some choices.