What designs are on the coins? 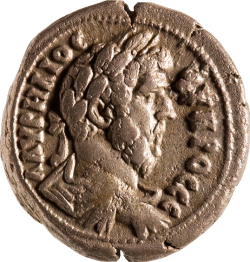 City coins normally have a portrait of the emperor on the obverse, but sometimes they do not. Coins lacking the portrait are, rather misleadingly, called ‘pseudo-autonomous’ or ‘anonymous’. Very occasionally there does seem to be a link with the status of a city (e.g. the free cities of Athens, Chios, and Tyre), but usually there is no suggestion of autonomy – they just lack the emperor’s portrait. Many of them are simply small denominations marked by non-imperial obverses, just as the small denominations of imperial coins minted in Rome often omitted the portrait.

The portrait was normally of the reigning emperor, or a member of his family. Family portraits were more popular at some times than others and there is sometimes a geographical bias: for instance almost no Julio-Claudian family members appeared on the coinage of Syria, whereas they were very common in Asia, much more so even than at Rome. Sometimes there was an elaborate hierarchy, whereby different members of the imperial family denoted different denominations.

Following the example of the imperial mint in Rome, provincial obverses from the middle of the first century onwards increasingly displayed the head and shoulders (called the bust) rather than just a head. From Nero onwards this bust could be shown with an aegis, the hairy divine attribute of the gods Zeus and Athena, which was fringed with snakes and adorned with a gorgoneion and worn around the neck.

From the reigns of Titus and Domitian onwards the imperial bust might appear in military uniform, wearing chest armour (called a cuirass) and a military cloak (called a paludamentum).

While the aegis remained rare, the cuirass and paludamentum became increasingly popular, and by the middle of the second century they accounted for more than half of all imperial representations.

The imperial portrait might be invested with other divine attributes: the emperor is sometimes shown wearing a crown of rays, a sign of divinity.

Empresses were normally depicted with draped busts. They often had elaborate hairstyles, which might change frequently, and often enable them to be identified easily. Caesars, the heirs to the throne, were normally shown bare-headed as a sign of their lower rank.

In Rome, an emperor often had his predecessors or other members of the imperial family deified. The imperial mint in Rome issued consecration coins on such occasions, but equivalent provincial coins are quite rare. 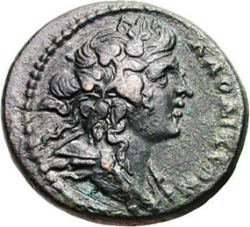 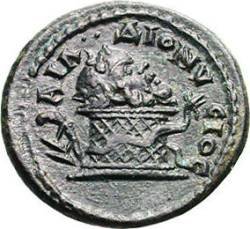 The heads on the obverse fall into three categories: 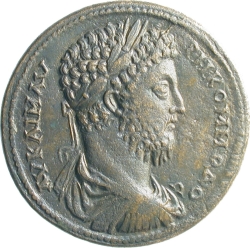 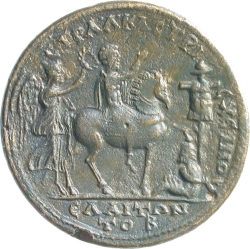 At first the number of different reverse designs was relatively restricted, continuing the earlier pattern of the Hellenistic period. From the late first century there is a trend towards much more variety, a trend which continued in the second century.

The reverses of city coinages usually made some reference to the city itself, most commonly to one of its cults. An important deity, sometimes a local one, might be represented in different fashions, and later temples started to appear. During the third century, references to local festivals became more common.

Buildings are often represented on provincial coins, you can search for temples, bridges or even some of the rare city views that the coins sometimes have. But beware: don’t treat these images as ‘photos’ of ancient buildings or cities, since they are often stylised or abbreviated. Sometimes a coin will depict fewer columns than a temple really had (the temple of Artemis at Ephesus, one of the Seven Wonders of the ancient world is a good example) and often the front colonnade will be ‘opened up’ to show the cult statue that would really have been hidden out of view inside the temple.

Many of the designs refer to the religious history of a city, and they may depict some aspect of its cults, often by a picture of a deity, perhaps loosely based on a cult statue, or in some other way. For example, the stag was the animal sacred to the goddess Artemis and so it often appears of coins of a city like Ephesus. The cults are usually Graeco-Roman, but not always: you can find sacred stones in Syria, or even Noah’s Ark on some rare coins of Apamea, presumably reflecting the presence of a Jewish community there.

From the second half of the second century, cities started to advertise their supposed mythological origins, as a way of stressing that they were old and venerable foundations. Examples are the dream of Alexander at Smyrna or Hero and Leander at Abydus, or Noah’s Ark. A number of cities also portrayed their own historical or mythological citizens on their coinage, especially ancient poets such as Homer and philosophers.

References to the emperor on civic reverses were not very common, but the relative frequency of such coins grew. Such references mostly relate to military victories or to the victorious nature of the emperor in general, most frequently through the depiction of Nikai (figures of Victory), trophies, and captives (see the coin of Elaea, illustrated above). A few issues celebrate actual visits by the emperor, such as Nero’s visit to Greece.

Some cities put dates on their coins. The most common are from Syria or Egypt. In Syria, the cities often used a dating system based on the foundation (or re-foundation) of the city. In Egypt there was just one mint for the whole province, and nearly all its products were dated by the regnal year of the emperor. The date in both cases is a numeral in Greek, preceded by the character L, which stands for ‘year’, although no one knows exactly why. 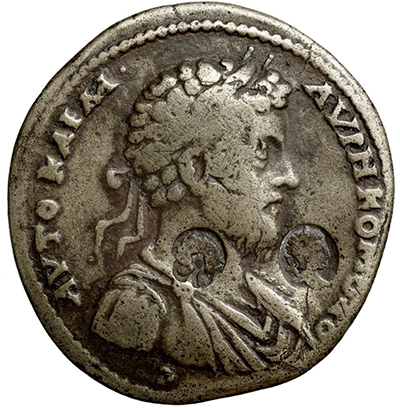 Countermarks are additional stamps applied to coins after they were struck. It is often not possible to be specific about why they were applied, but they provide important evidence about how long and how widely coins circulated, who used them, and what values were attributed to them.